DoomGals is a helper mod for classic Doom that allows you to summon up to four demon girls at any time to rip and tear by your side! Each girl has her own set of attacks and unique abilities that grant the player powerups, so choose which one you think would be best to help you finish a level...or summon all four for maximum carnage if you're up against a slaughtermap and need all the help you can get!

Apart from Doom I and II and their respective expansion packs, DoomGals is also highly compatible with both Heretic and Hexen, so bring ye fair maidens to do battle in yon times of legend!

Note: DoomGals requires GZDoom and a copy of either the Doom, Doom II, Heretic and/or Hexen IWADs in order to run. It may be possible to use FreeDoom, but the mod has not been tested with it.

You are given a set of four demon spirit orbs

in your inventory at the start of a map. Use the Previous/Next Item keys (default [ and ]) to choose between the orbs and the Activate Item key (default Enter) to summon a DoomGal corresponding to the color of the orb used, which will consume the item:

A spunky humanoid Cacodemon with an appetite for hoagies, Iris  can reach hard-to-hit enemies thanks to her power of flight and area-effect lightning attacks. She can also power up the player to temporarily double their attack and movement speed!

Not to be confused with a certain other female imp (ahem), Cynthia is an athletic fighter whose kicks can set enemies and the environment aflame. She can also temporarily increase the player's attack power thanks to her cheerleading skills!

A prim and proper demon princess, Primrose's close range fighting skills are nonetheless strong enough to send even the biggest enemies flying! She's also really good at baking and will occasionally share some cake with you to heal your wounds.

Spider Mastermom's favorite daughter and a hardcore gamer, Amaryllis is a young genius whose mobile gun platform can take down targets at extreme distances. It's also capable of processing its own ammo, which she will gladly share with you!

The DoomGal will automatically follow the player and even teleport next to them if they're too far away or out of sight, and will actively seek and target enemies in their vicinity. They can also provide powerups for the player after charging up their special abilities by attacking hostile targets.

Be warned, however: the girls are not invulnerable to either your attacks or the enemy's, and they will get temporarily knocked out if they take too much damage! Collect hoagies

from the environment and feed them to the girls to keep them in good shape. Should a DoomGal lose all of their HP, you must wait 120 seconds for them to respawn.

It is also possible to command each DoomGal to Stay and hold their position, or continue to Follow your movements by pressing the Use key (default E) next to them. They will still be able to attack enemies in Stay mode, allowing you to set them up near chokepoints to attack enemies from a safe position or prevent them from walking into traps and ambushes.

The DoomGals will also temporarily enter a ghost state when being commanded to Stay or Follow, allowing the player to pass through them and preventing players from getting trapped in tight corridors and dead ends.

Note that the girls cannot dodge projectiles or teleport to your location when in Stay mode. If the DoomGals were somehow left behind in a certain part of the map in Stay mode and thus unable to teleport to you, use the Mobile Phone

to summon them from afar and set them to Follow mode again.

Substance20 - Concept, spritework, DECORATE coding grunt duty, trying to get ACS to do what he wants without making the computer crap itself

1) Get the latest version of GZDoom
2) You also need the IWADs of either of the following: The Ultimate Doom, Doom II, Heretic or Hexen (FreeDoom may also be used)
3) Drag the dg_helper_v1.wad file onto gzdoom.exe (along with any other mods you might want to use), select the IWAD to be used and enjoy! (alternatively, use a mod loader like ZDL or a batch file to make things easier)

aww, these are cute! 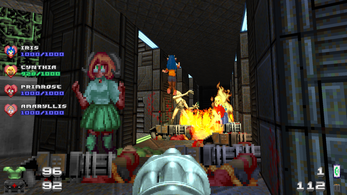 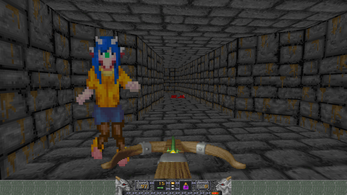 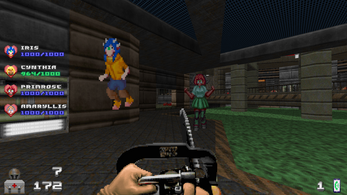 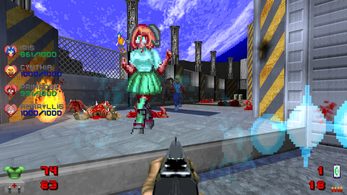